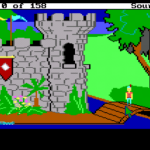 This photo is from the first video game to ever use pictures -- a game developed by a woman. The video game industry has long been considered one big 'Boy's Club.' Most of the top positions are still occupied by men, and even the games tend to be marketed for men. Little by little though, women are breaking the glass ceiling—thanks, in part, to the following people. As … END_OF_DOCUMENT_TOKEN_TO_BE_REPLACED