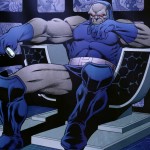 They say that the true measure of a hero's greatness is defined by the severity of the evil he has to overcome. This saying says a lot about the hero and equally so about the enemy he has to face. A hero's worth is somewhat diminished if he doesn't have to face adversity and adversity in the form of an evil archenemy is the stuff of epics and legends. The same can be said … END_OF_DOCUMENT_TOKEN_TO_BE_REPLACED