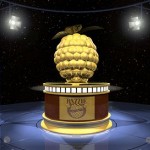 The Oscars celebrates the best of the movie industry—acting, editing, directing—but the Golden Raspberry awards celebrate the worst. "The Razzies' as they are affectionately called was established in 1981 by John J.B. Wilson, a copywriter. This cheeky tribute has gotten cult following, that even the celebs play along. Halle Berry, for example, actually attended the awards … END_OF_DOCUMENT_TOKEN_TO_BE_REPLACED