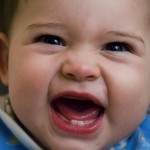 Recent research has shown that babies are far smarter than we give them credit for.At four weeks gestation, before we even knew we were pregnant, the fetus' neurons are developing at a rate of 250,000 a minute. At birth, he has over 100 billion neurons. And by the time he is eight months old, his brain has already formed 1,000 trillion synapses. That's twice more than what … END_OF_DOCUMENT_TOKEN_TO_BE_REPLACED