Didn’t we always dream of being the perfect mom or dad, and raising equally perfect children? But truth trumps fiction every time and when our time as parents came, we had to let go of unrealistic and fantastical goals. We learned that we are also guilty of parenting behaviors that are not the ideal. So, don’t be disheartened if you have normal kids who get into scrapes or talk back or sulk. It only shows they’re human after all.

That said, there are still parenting behaviors you should avoid because the consequences are harmful for the child’s psychological and mental health. The main characteristics of these behaviors are neglect or abuse in any form. Children regularly exposed to them end up with low self esteem and as adults, they will have a hard time maintaining relationships, keeping jobs and becoming independent and self-sufficient. If you want to know what actions and attitudes you should avoid in parenting, here are some guidelines: 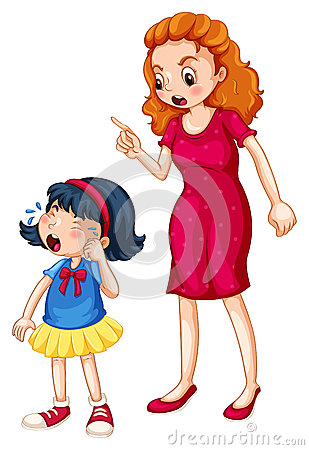 Children who suffer from a lack of personal value often have an inner voice telling them that they are worthless and stupid, and are doomed to fail in any endeavor they undertake. They are the offspring of parents who are overcritical and demanding. As a parent, you may not actually have said derogatory words but your actions can convey the message in many other ways. Controlling behavior implies the child is incompetent and cannot be trusted to do something successfully. Do you seek perfection in your children by expecting them to achieve the highest grades or the top position in the team? Do you show your disappointment if your child gets an A instead of an A+?

A child who grows up under this environment usually turns into a self-destructive and needy adult who cannot keep a stable relationship.

Control of parents is necessary because there will always be decisions that they have to make for their children. But when you cross the boundary of how much control to take, it can become toxic for the children growing up. You are cunningly controlling your children by withholding money if the children are still financially dependent on you. Another way of controlling is by making them feel guilty over a decision they make that is contrary to what you want. Some parents defend their controlling manner as protecting their children. Examples of excessive control are not allowing them to make their own decisions like what they want to wear or the hobbies they want to pursue and later, in their choice of college degree and jobs. They are not permitted to question your decisions or disagree with you and their opinion does not count in family or household matters.

As adults, children who had to toe the line, no questions asked, are unhappy and have a lower life satisfaction. They find it difficult to relax, feel discontented in relationships because they are always putting the needs of their partner first and find it hard to trust other people or to stick to a spiritual belief.

Sad but true, some parents think they have the right to know everything that’s going on with their children. And with the advancements in technology and the trends now that were unheard of their time, we can’t exactly blame them for checking on the smartphones to make sure their teenage girl is not sending half naked photos of herself to some boy. But ignoring the boundaries that children crave is harmful to the parent-child relationship and your kid will end up resenting you and will find ways to keep information and other things away from you.

The best you can do as a parent in respecting your child’s privacy is to have a forthright talk with them on core values and propriety, the proper use of the internet and the dangers lurking online. Follow the basic rules of knocking before entering their rooms and not snooping on their chats and text messages. Not giving your children their physical and emotional space will make it difficult for them as adults to respect the boundaries of other people and this can cause problems for them later in life.

Being a distant parent

A distant parent is one who is not there emotionally more than physically. Work might necessitate one parent to be away from the house for long periods of time but emotional distance has more harmful consequences for the child. It shows when you’re not interested in your children’s activities and you listen with only half an ear as they tell you their stories or when you don’t ask how their day went and you’re not there for the important events like a play they are part of, or graduation day. Children need to feel they are important to you and you love them.

Children who grow up in an emotionally barren environment become adults who harbor much pain and anger within themselves. This can hinder them from having a harmonious and stable intimate relationship. They have volatile moods, are harsh on themselves, cannot complete a project and have other negative behaviors due to a lack of self-worth.